When we began using raw diets to transform the health of pets more than 25 years ago in veterinary practice, it was long before the appearance of the numerous raw pet food companies that exist today.

Our philosophy then and now, hasn’t changed one iota over the years. And that is to use specially formulated recipes to provide maximum nourishment in every mouthful and the greatest possible clinical health benefits, to deliver truly life-changing nutritional care.

And the many thousands of dogs who have gone on to live much healthier and happier lives as a result, are a testimony to the quality and effectiveness of our raw (and supplements).

For this to be the case, great care is taken over the selection of ingredients, the proportions of meat, offal and bone, and all the details of the manufacturing process, which include strict quality control and adherence to all relevant regulations.

This doesn’t come cheap - but we believe your pet is worth it.

In the current economic climate, it’s natural to compare prices of products which may at first appear similar, but once the hood is lifted, can often be worlds apart.

And so we’ve written this article to highlight all the elements that combine to make Vince the Vet Raw the most nutritious and life-enhancing raw your dog could possibly be fed.

It will also show some of the measures that are often employed to lower the price of a raw product.

Our raw is manufactured in the UK from British livestock.

Raw labelled ‘manufactured or made in the UK’ without stating that the animals are from British farms, are likely to be using frozen, imported meat instead.

Because this can be stored for 6-12 months or even longer before use, the age of meat in such a product is difficult to assess and may be considerably older than the date of production suggests.

A list of the ingredients, along with the percentage of each used, plus nutritional analysis figures for the complete product should be clearly displayed as this is a legal requirement.

If they are not there, beware.

Vince the Vet raw uses lean muscle as the main source of animal protein, as it is the easiest to digest and most nutritious meat. And although not intended for people to eat, it has been passed as fit for human consumption - along with the offal we use. 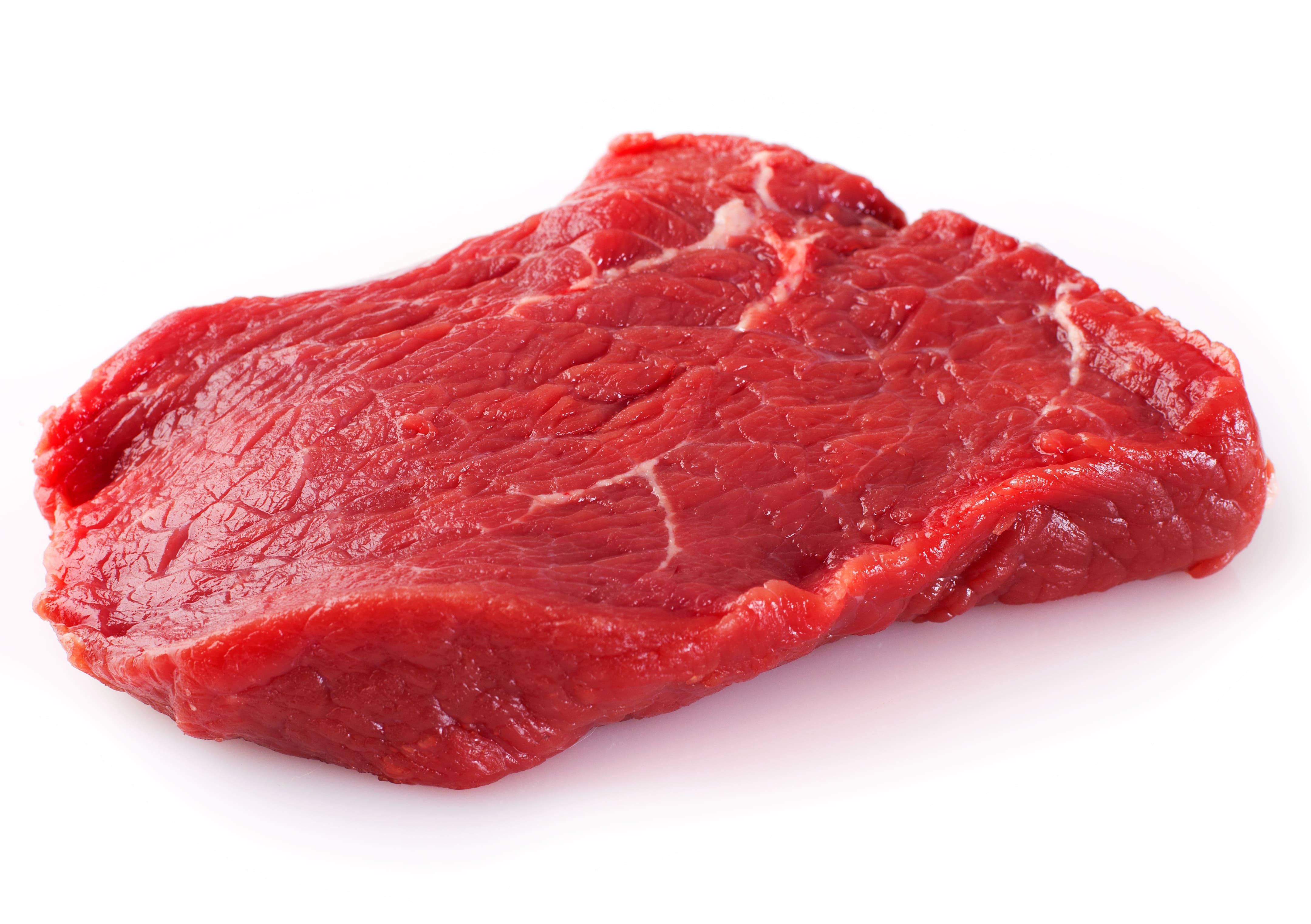 Other, cheaper cuts, which have a higher percentage of gristle, are more difficult for the body to break down (picture sirloin steak compared to shoulder and leg meat). This can aggravate sensitive bowels or digestive issues of any kind. It is also less than ideal when a highly digestible source of protein is important to support tissue repair, and help a dog recover as quickly as possible from ill-health, surgery or an injury of any kind.

Although anatomically an organ, it is often used as a cheap replacement for meat.

And as smelly as it is, most dogs love it! 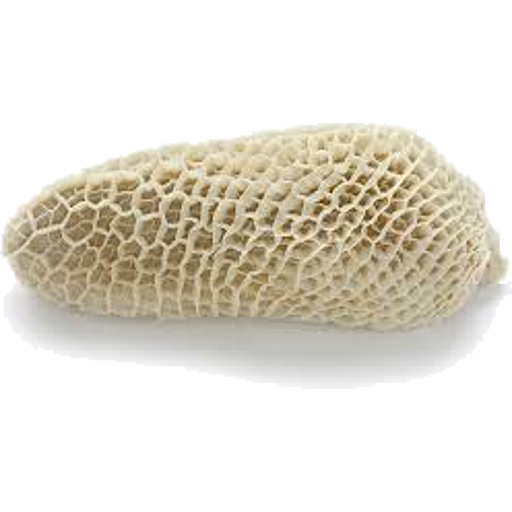 This is not an ingredient we use in our recipes however, as it only supplies around half the amount of protein as muscle and is harder to digest. This means the digestive tract has to work harder to gain significantly less nourishment from tripe. It is better suited therefore, to be an occasional topping if desired, rather than forming a large proportion of a core raw. (It is not uncommon for some raw foods to be composed of 20-50% or more of tripe.)
Especially vulnerable to a reduction in protein in the diet as a consequence of feeding large amounts of tripe, are medium, large and giant breeds, and other dogs with high nutrient demands, such as the young, rapidly growing, working, active, large boned, chronically itchy or ill and elderly.

Heart, liver and kidney are highly nutritious organs, supplying a range of essential amino acids, vitamins, fatty acids, minerals, trace elements and fat soluble vitamins, to complement meat and bone, and help to ensure that a balanced diet is fed. And this is why our recipes contain these instead of lung, spleen and other cheaper, less nutrient dense organs. 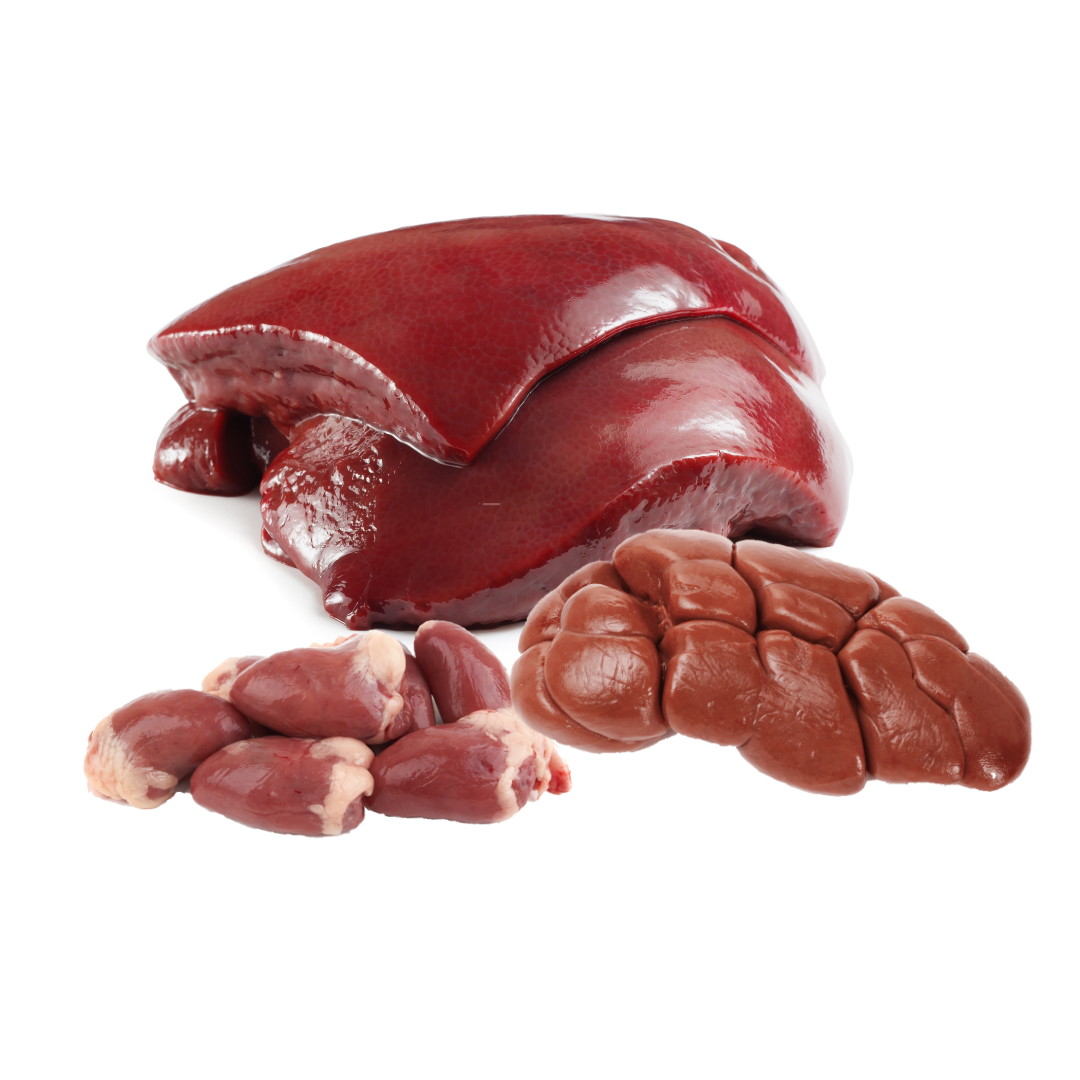 Leaving offal out completely to feed only meat and bone, results in an unbalanced and nutrient deficient diet, which without the right supplementation, will inevitably cause health problems for any dog over time.

The benefits of ‘5 a day’ for people is widely recommended, and so it’s natural to assume that the same is true for dogs.

For many however, this isn’t the case for the following reasons:

The Pesticide Action Network recently analysed 12 years of residue data published by the Expert Committee on Pesticide Residues in Food (PRiF) and found 123 different pesticides. These include known carcinogens, hormone disruptors and chemicals which can be harmful to the liver and kidneys.

An increasing number of dogs today are sensitive to vegetables and fruits (along with grains, oils, herbs and other ingredients).

3.  Yeast overgrowths
The sugars present in fruit and many 'sweet' vegetables fuel the growth of yeast in the gut, on the skin, down the ear canal and elsewhere. These include carrots, beets, onions, peas, sweet corn, canned pumpkin, squash, tomatoes, sweet potatoes and others.

4.  Hard to Digest
Vegetables high in fibre can’t naturally be broken down by dogs, as they lack the digestive enzyme required to digest plant cell walls, which is composed of cellulose.

This means that unless they are physically mashed in some way the nutrients they contain remain locked inside - which is why most fibrous vegetables fed to dogs go in one end and comes out of the other, largely unchanged. (Who hasn’t seen sweetcorn kernels or pieces of carrot in a dog’s stools after these have been eaten?)

From a commercial point of view, vegetables and fruits are a fraction of the price of muscle meat, and so adding 10%, 20%, 30% or more of these to the mix as a 'filler', significantly reduces the cost of producing a raw food, which in turn means the retail price can be kept low. (The same applies to vegetables and fruit added to cooked and kibble dog foods.)

5.  Lower in Nutrients
100 years ago, fruit and vegetables were slow to mature, relatively small, grown on naturally fertile soil, and as a consequence were rich in essential vitamins, minerals and trace elements.

Today however, most are fast maturing, large varieties, grown on soil depleted of natural nutrients by decades of intensive farming. As a result they are significantly less nutritious than they used to be.

In many ways the complete opposite to the above, is Vitality, which is a healthier and more nutritious alternative to vegetables and fruit, by virtue of the fact it is: 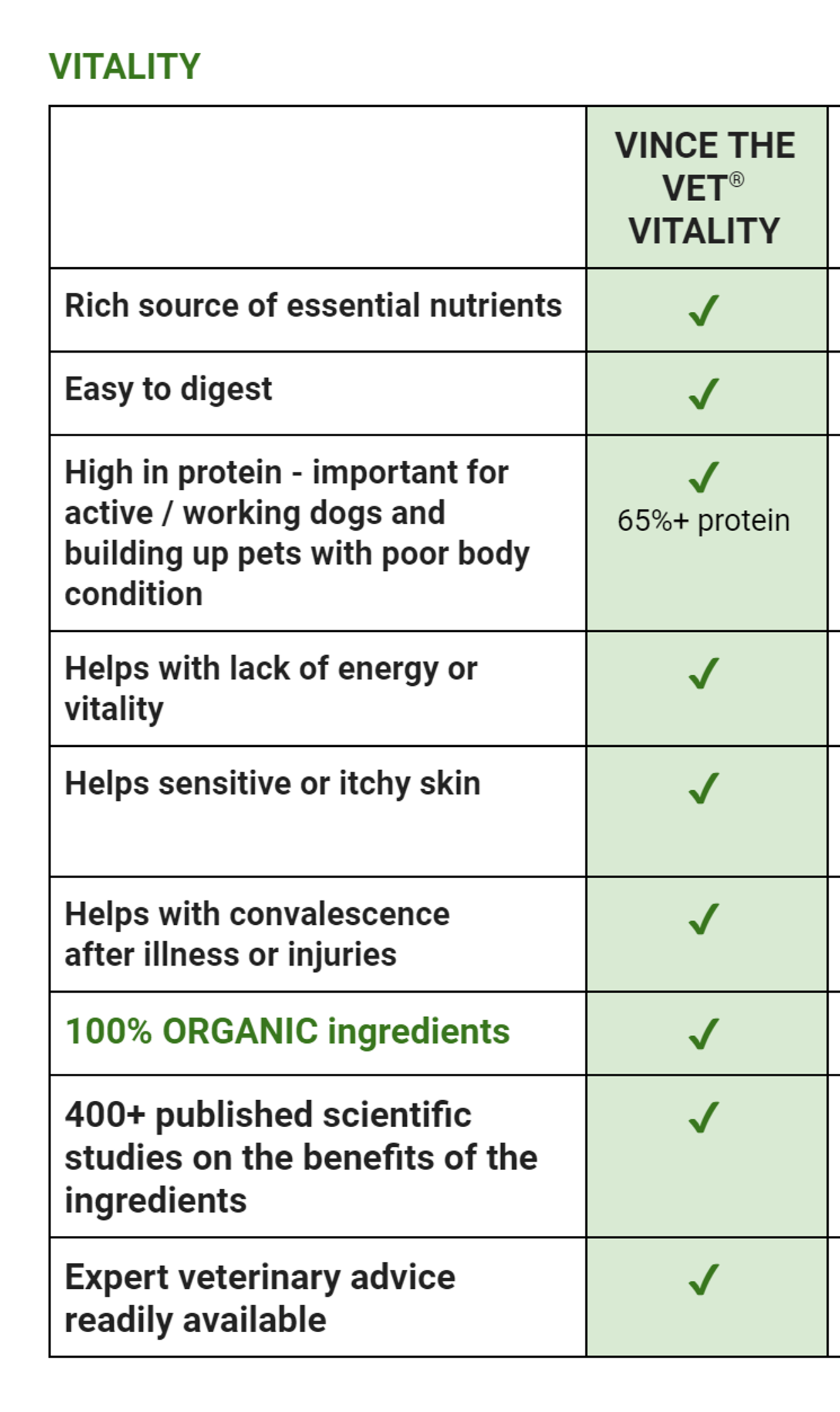 Some dogs benefit from a little extra fibre in their diet to help with bowel movements, and for those that do, it is fine to add a dessertspoon of freshly chopped organic broccoli or cauliflower to each meal (either mixed in or as a topping).

Compared to Vince the Vet Raw, which is 100% lean meat, offal and bone, a 1kg raw food containing 20% vegetables and / or fruit, and priced at £4.00, means that 80p is being spent on significantly less nutritious ingredients, which also have the other drawbacks highlighted above.

And don't forget, the bulk of these pass through the bowels, largely undigested.

By comparison, a teaspoon of Vitality costs approximately 30p - which  as we have seen, provides a good deal more nourishment and greater health benefits.

Production
Vince the Vet Raw is manufactured in a government inspected and approved plant, to ensure compliance with all hygiene and food standard regulations. There is also regular microbiological testing of samples to ensure the food is free from pathogenic bacteria.
A certified raw food will always have a Defra approval number
clearly visible on labelling.

This is your guarantee that the relevant industry requirements are being met, and the raw concerned is as as safe for your dog as it can be.

Food trials are the only reliable way to determine whether a raw food suits a particular dog, or causes a reaction.

It is essential therefore, that a raw food being used for this purpose, is composed of meat, bone and offal from one species only, and that nothing else is added (see the effects of vegetables and fruit above).

Vince the Vet single protein recipes ensure that this is the case. There are raw foods described as single protein however, which use meat from one animal (beef, for example) and ingredients from another, such as chicken bone, or lamb tripe. As always, it pays to examine labels closely to see exactly what is in there.

The more ingredients there are in a raw, the more likely it is to cause a reaction in a dog with diet related health issues.

This is why Vince the Vet Raw is designed to deliver the maximum amount of nourishment, using the least number of high quality ingredients. 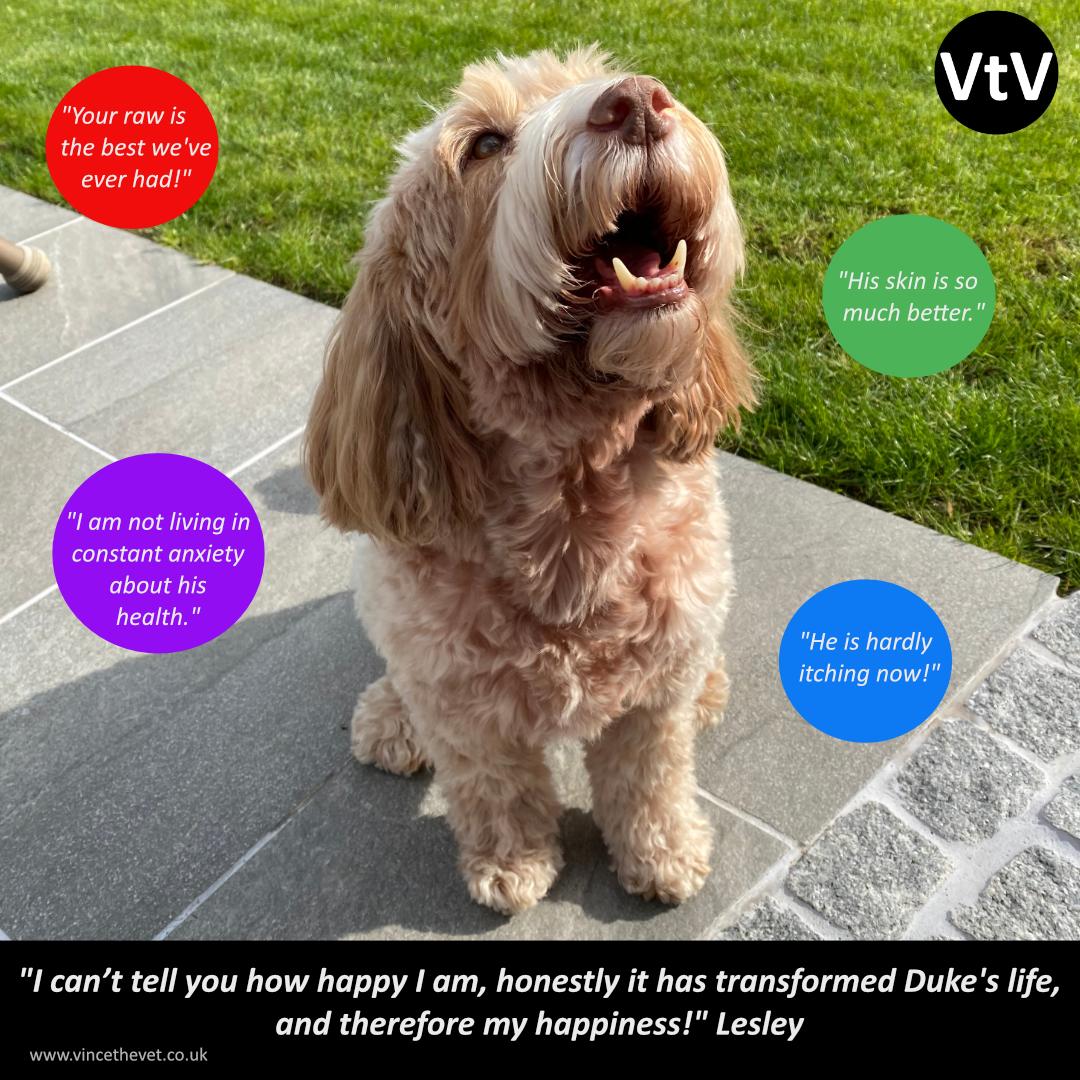 "I can’t tell you how happy I am, honestly it has transformed Duke's life, and therefore my happiness!

Your raw food is a perfect texture… not sloppy, not too wet, not too dry, doesn’t smell nasty. The blood in the food is clearly very fresh.

We’ve previously tried numerous brands, plus DIY using the local butcher. By a long way, your food seems to be the best quality. (I would say Duke's favourite, but he is very food driven so he never been known to refuse any food!)

Before we started your raw and supplements, his skin was red raw, constantly wet from licking and biting, and his fur was very rusty coloured.

Now, still a bit pink but no longer deep brown. There's no redness on his skin, plus the odd scab / spot that appears remains clean and dry, and he doesn’t lick or bite them at all.

Also, previously his ears needed a daily clean of brown gunk - now they’re so good I forget to check them from one week to the next!

Before we started, Duke's itching was probably 9 on a scale of 1 to 10 (10 being the worst)... he would scratch / bite / lick every couple of minutes. It was horrible to watch and no doubt distressing for him.

Now he scratches / bites just once or twice a day, and don’t we all have the occasional itch! So just a 1 out of 10!

The difference this has made? I am not living in constant anxiety about his health and well-being, and he just gets on with being a happy dog.

After the first couple of days of drops, my husband (who generally is a sceptic of holistic types of treatment) commented how Duke just seems to have more energy and be happier.  And he is! Difficult to pin point exactly what it is, but he is getting back to his old self.

We no longer have to bath him every day to try to bring him some relief. We do still bath him about 3 /4 times weekly, but mainly because he enjoys jumping in the mud / puddles on his walks!"

We hope this article gives some insight into the differences between raw foods, the reasons for variations in price, and why Vince the Vet Raw is so effective at transforming health.